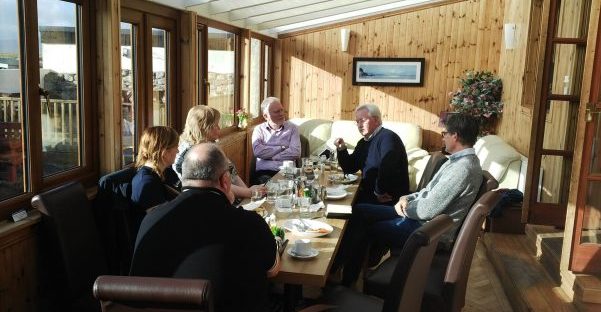 The email from the office was headed “Negative Feedback”. My heart sank. It was Day 3 of our Better Conversations Bus Tour and we’d had a number of really good meetings so far. What was this about?

“He is enraged by the marketing of the bus tour”… “an example of poor communication”….”A further example of Edinburgh not understanding that Scotland is not just them but a whole country and giving scant regard to those in the Highlands and particularly the disparate communities in the North West Highlands”…”Marginalised, disenfranchised, forgotten”.

Phew. Quite an email. There was only one thing to do. I called the person concerned and we had a long conversation. It was clear that we had not explained sufficiently who we are and what our purpose is. Layers of assumption and judgment existed for both of us. I apologised and explained what the tour was really about. No, we were not sent by the Scottish Government to tick more boxes. We were truly independent and really wanted to listen and talk about what was important in these communities. After a while, he said he could change his plans and join us that evening. He did – and we had one of the most profound conversations of the tour so far.

“You’re the first group of people who have come here that I’ve spoken to in 40-50 years who are willing to talk about matters based purely and simply on communication. It’s the most important thing of all.”

I realised that not only had we mis-communicated but that we were repeating what was perceived locally as always being “done to them”. Consultations where the decisions were already (apparently) made, meetings in places which took three or four hours of public transport to get to, unanswered emails, reducing resources and a direction of travel away from supporting these communities as sustainable. Perhaps this is all perception of course, but no less real to those who experience it.

One of the key discoveries of this tour has been the mismatch of expectations and perceptions between local communities on the periphery of Scotland and those who make decisions in the “south” and “east”. If there is a legacy for this tour, it will be to find ways to address this honestly and openly. The future of these communities, and an important part of Scotland’s economy, may depend on it.

The Better Conversations Bus Tour will continue in Lochinver today and we are very interested to hear what local businesses and people think the local issues and challenges are.